Jenefer McArthur wears a mask and talks with election officials through a clear partition as she signs in to cast her vote Tuesday at the Enka/Candler library in Buncombe County. Colby Rabon / Carolina Public Press

Madison Cawthorn earned 66% of the votes over Lynda Bennett’s 34% to win the Republican nomination for the 11th congressional district in Tuesday’s second primary in 17 Western North Carolina counties according to unofficial results.

In the southeast, Chris Smith led with 61% of the vote in the vote redo for the Republican nomination for District 2 county commissioner in Columbus County. Mack Ward was in second place with 37% and W. Bernard White in third with 2%.

There are no outstanding absentee by-mail ballots in the Columbus County race and not enough in the 11th District to change the outcome.

While the purpose of an election is to select winners, Tuesday’s vote also marked an important step toward November’s potentially complicated election in North Carolina. Eighteen counties in two parts of the state conducted their first election during the COVID-19 pandemic.

The first case of COVID-19 in North Carolina was confirmed on the same day as the statewide primaries, March 3. The administrative processes that occur after every election were slightly hampered due to COVID-19 precautions, though the conditions were nothing like those in place on Tuesday. 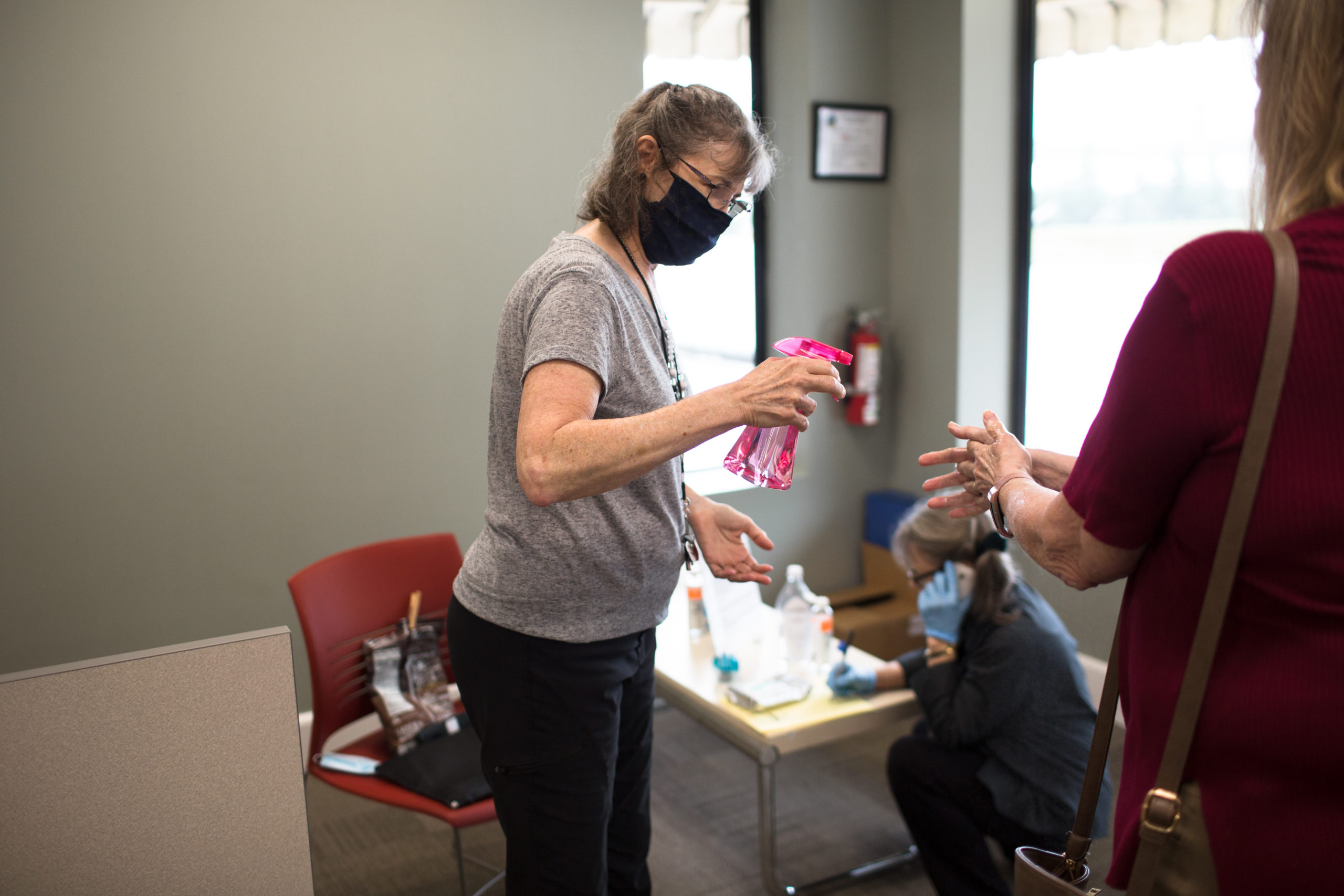 The polling place chief judge at the Enka/Candler Library in Buncombe County, Beth Aldecoa, sprays hand sanitizer on a voter’s hands as she enters. Election workers had hand sanitizer and masks for people who needed them. Though voters weren’t required to wear masks, many did. Colby Rabon / Carolina Public Press

Tuesday’s elections were the first conducted in North Carolina during any global pandemic since the 1918 flu. They were also the first since Gov. Roy Cooper signed into law a bi-partislan bill to help the state run elections during the pandemic.

This election is a learning opportunity, according to Robert Inman, Haywood County’s election director.

Inman and Cliff Marr, elections director for Polk County, both said they are running the election with the minimum number of poll workers.

“We have the minimum number of people we could possibly by statute to conduct an election with, in place today,” Inman said Tuesday.

“Now, we need many more people before going into October, November.”

The recent legal changes will give counties more flexibility on assigning poll workers to different precincts, but recruitment remains a serious problem.

COVID-19 is more dangerous to people over 60 years old, and many of North Carolina’s poll workers have traditionally been in that high-risk group.

Inman’s second lesson is about space. When voters and poll workers have to stay six feet apart, polling places need to be in bigger buildings.

No lines occurred for early voting or on Tuesday for the five elections officials CPP interviewed, but Inman cautioned that going into the fall will be “a completely different set of circumstances.” He is expecting record turnout in the November election.

Problems of scale — like lots of voters causing long lines, backlogs of absentee by mail ballots or processing of those ballots — were not at play on Tuesday.

Participation in the second primary was limited to registered Republicans and to unaffiliated voters who voted in the Republican nomination during the first primary. As in most second primaries, turnout was low.

What will happen to lines when everyone has to be spaced apart during the general election?

Inman is worried about space management both inside the polling places and around them.

For example, he is considering polling places where he can manage lines to prevent people queueing in parking lots or across driveways, which is a safety hazard.

The increase in absentee by-mail voting is perhaps the biggest change anticipated for North Carolina’s elections during the COVID-19 outbreak.

Counties around the state are already reporting higher numbers of absentee ballot requests for the November election, with Marr anticipating at least a three-fold increase, and the State Board of Elections projecting much more.

But elections directors in congressional district 11 didn’t see a swell in those requests for Tuesday’s vote, which means that some of the logistical hurdles seen with lots of by-mail ballots did not surface during the second primary.

For example, even though the elections are mathematically decided based on the small number of requested mail-in ballots that haven’t been returned, county boards of elections can accept absentee ballots that arrive as late as Friday if they are postmarked by the end of the day on Tuesday.

While Tuesday’s outcomes weren’t close, in close elections, those additional ballots that are not counted on election night can sway the outcome of an election.

In November, those ballots could number in the thousands for a single county and could have a major impact on local or county-wide elections, if not statewide results.

CPP spoke to the election directors for Clay, Madison, Polk, Haywood and Transylvania counties. Each praised the State Board of Elections for providing personal protective equipment for polling places and for answering county questions in a quickly changing environment, in the state’s first major test for running elections during a pandemic. 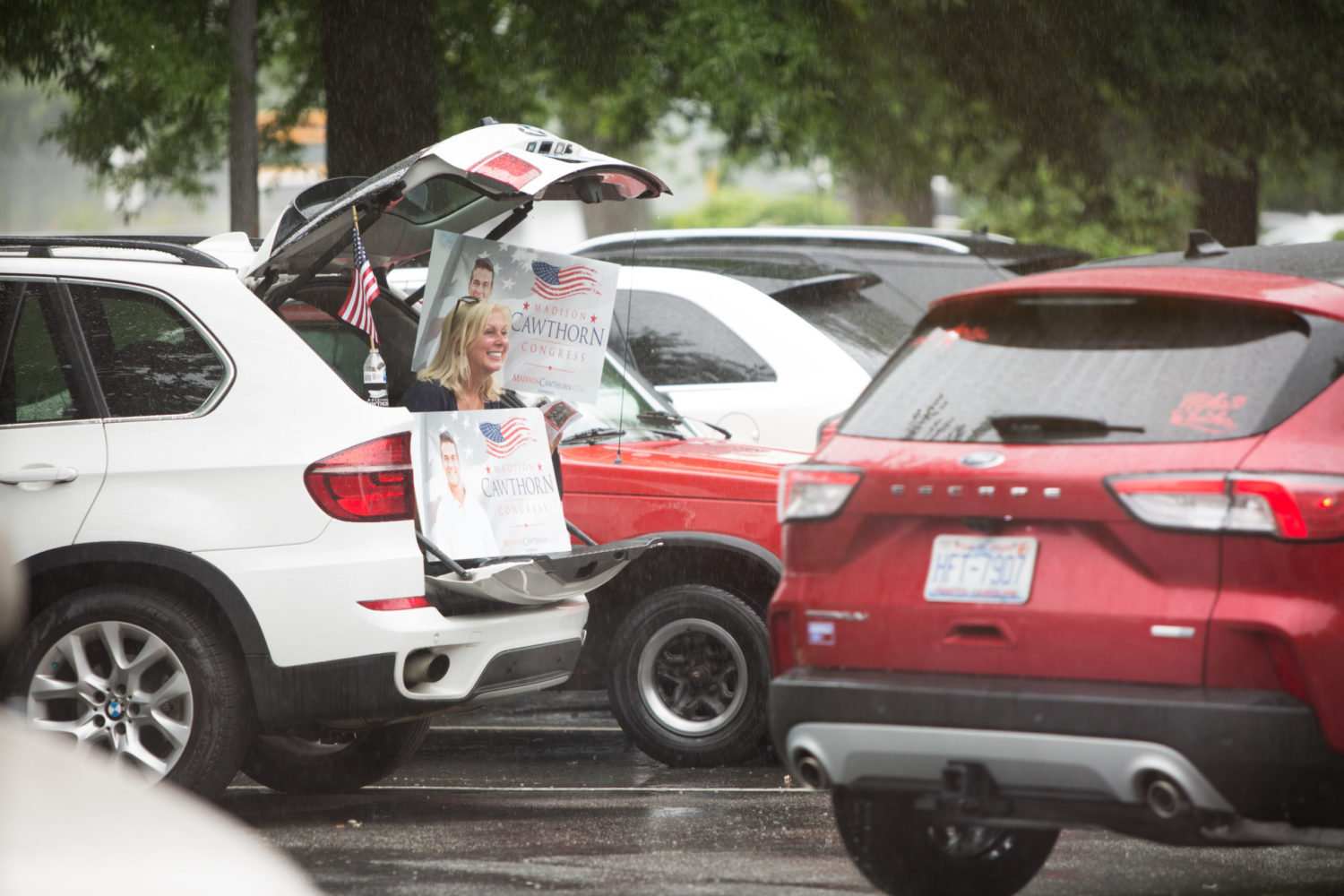 Under the partial shelter of a hatchback door on a stormy afternoon, Priscilla Cawthorn, mother of candidate Madison Cawthorn campaigns for her son Tuesday outside of the Enka/Candler Library in Buncombe County. Cawthorn won the election by a nearly 2-to-1 margin, despite his opponent having endorsements from both former Rep. Mark Meadows and President Donald Trump. Colby Rabon / Carolina Public Press

In the 11th District, since no candidate earned more than 30% of the vote on Super Tuesday, the two top finishers were were forced into the second primary.

Originally scheduled for May, concerns over the new coronavirus outbreak delayed the election over a month.

Cawthorn will face Moe Davis, the Democratic nominee, in November’s election. The winner will take the U.S. House seat previously held by Mark Meadows, who resigned on March 30 and is now President Donald Trump’s chief of staff.

The district, like several other congressional districts across the state, includes some different voters in different locations from previous elections over the last decade, due to a court-mandated redistricting last year. Large portions of Buncombe County, which leans heavily Democratic, were added to the district, which could make the race more friendly for Democrats than before.

However, Buncombe is by far the most populous county in the region and despite the Democratic tilt also has more Republican voters than any other county in Western North Carolina. This may have benefited Cawthorn, who resides in adjacent Henderson County. His campaign was clearly aware of the importance of Buncombe Republican votes and sent one of the candidate’s top representatives, his mother Priscilla Cawthorn, to campaign for him at the Enka/Candler Library polling place, one of the top Republican turnout areas in the region in past primary elections.

In the March primary, Cawthorn finished second behind Bennett, who is a friend of Meadows and was endorsed by him. Bennett closely aligned herself with Trump and included his endorsement prominently on her websites, though Cawthorn also campaigned as a supporter of the president.

Columbus County, in the southeast corner of the state, redid its Republican primary election for county commissioner, district 2. After the March primary, election audits found that 10 voters were given ballots with the District 2 contest, but were not eligible to vote in that contest. The margin of victory was only four votes, so the primary had to be run again.

In both the 11th District second primary and the Columbus County redo election, all absentee by mail ballots appropriately received on Tuesday through Friday will be counted in July, before election results are made official on July 6. That count will also include approved provisional ballots and military votes. However, both outcomes are clear enough that they will only provide a definitive count of the margin of victory for Cawthorn and Smith. 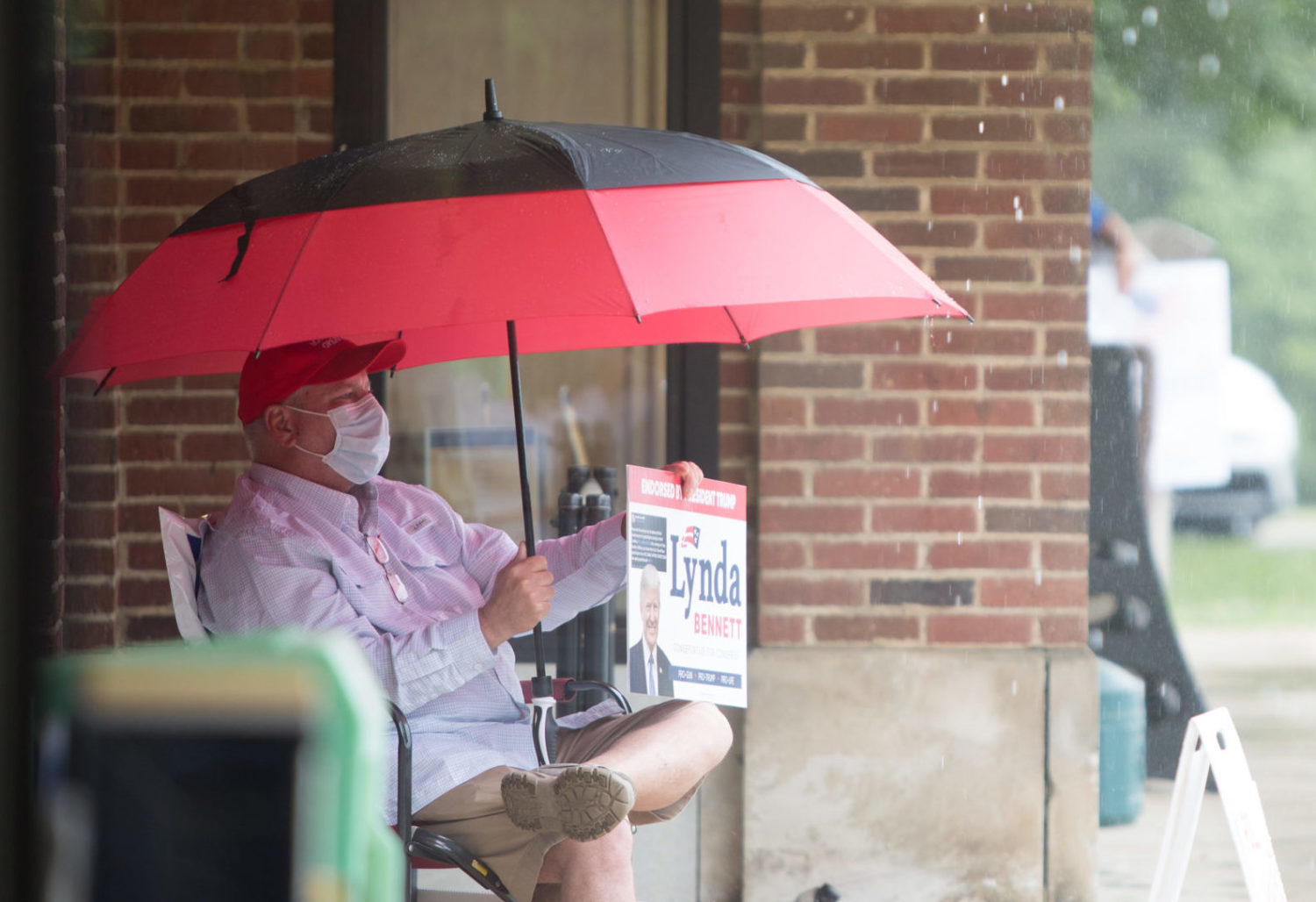 Jim Meadows wears and mask and carries an umbrella as he braves thunderstorms and the COVID-19 pandemic to campaign for Lynda Bennett outside the Enka/Candler library in Buncombe County on Tuesday. Bennett ultimately lost the second primary contest to Madison Cawthorn. Colby Rabon / Carolina Public Press

Running an election campaign during a pandemic

The COVID-19 pandemic has altered the election for the politicians, just as it has for voters and election officials.

Davis, the Democratic nominee in the 11th District who will not face the voters again until this fall, launched twice-weekly Facebook Live events.

In addition to increasing their online presences, both Bennett and Cawthorn began hosting in-person campaign events after the state moved to “Phase 2” of its reopening plan.

Davis’ campaign, too, said it would start meeting people in person again if the governor continues to relax restrictions.

That may limit campaigning, as it could make it more difficult to find venues, and make events subject to weather through the summer, during hurricane season and into cooler days in October and November.

Bennett’s and Cawthorn’s campaigns did not respond to emails requesting comment. 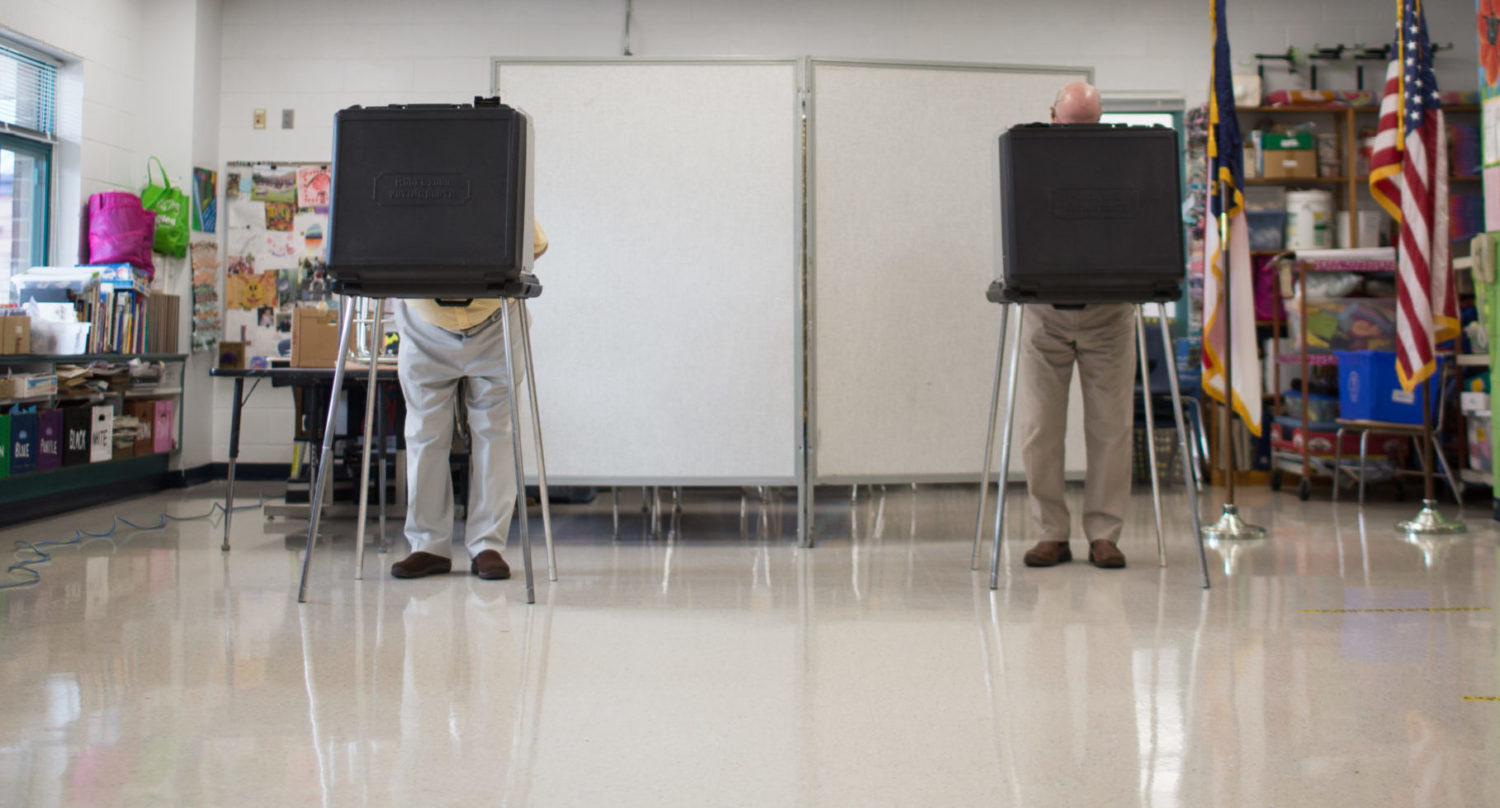 May 21,2020 In my on-going informational series about Foothills Health District today I want to focus on who our health director is and what her duties are, as well as answer a few questions that had been sent to me concerning the recent incident in Spindale with Carolina Cafe.  To do this I referenced NC […]

By NC Policy Watch Staff [Editor’s note: A new “must read” report from the North Carolina Poverty Research Fund provides what is perhaps the most damning assessment yet of North Carolina’s failure to follow the lead of dozens of other states by expanding Medicaid under the terms of the Affordable Care Act. The following summary/introduction […]

Who Are “The Guardians”  (Foothills Health District)

May 19,2020 In late January of this year it was acknowledged that Covid-19 entered our country. The nation suddenly found itself in the grip of a pandemic. The government turned to national health experts across the country to help, they in time turned to State health officials who then turned to local health department […]