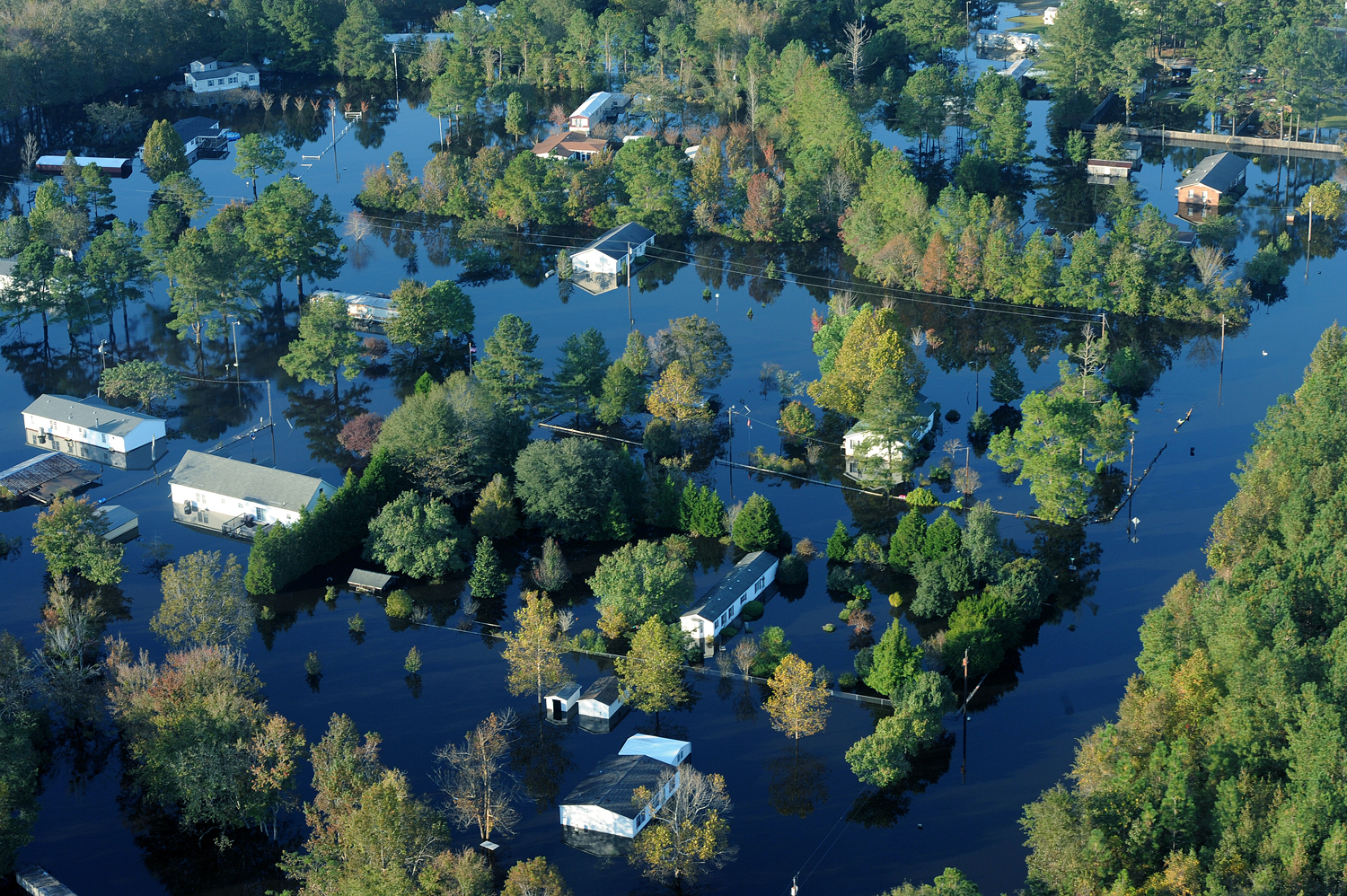 Waters remain high on Oct. 17, 2016, as the flood surrounds many houses near Vanceboro in Craven County following Hurricane Matthew. Photo courtesy of FEMA.

After years of updating flood hazard data, North Carolina and the Federal Emergency Management Agency have been rolling out the latest Flood Insurance Rate Maps, or FIRMs, for communities along the coast – but some state and local officials are cautioning residents against relying too heavily on the new documents when assessing risk.

The recent release of new data marks the first time in roughly a decade that property owners may see their real estate move from one flood hazard zone to another as well as fluctuations in base flood elevations in at at-risk areas – two issues that have significant effects on flood insurance rates as well as building practices in coastal communities.

The latest batch of finalized maps, set to go into effect in June, includes seven central coastal counties of Dare, Hyde, Onslow, Craven, Beaufort, Pamlico and Pitt – communities that often find themselves in the potential path of hurricanes each year.

Other coastal counties, such as New Hanover, Currituck and Brunswick, saw their updated maps go into effect in 2018, while some communities, such as Carteret County, have appealed some portions of the revised maps, which has delayed their adoption.

Some communities, like Dare County, will see widespread changes in flood zone designations in June, with just over 40% of properties in that county being moved out of a Special Flood Hazard Area, or SPHA.

The updated maps, says Randy Mundt, N.C. Floodplain Mapping Program outreach coordinator, take into account several newer coastal models the state has been using to predict storm surge, nearshore wave action, how water behaves and how waves will act when they’re on normally dry ground that has been inundated because of the surge.

What the new FIRMs don’t factor in, he asserts, is flooding from rainfall or the impacts of climate change. The result has even left some community officials, like Hyde County Board of Commissioners Vice Chairman Tom Pahl, scratching their heads.

Evidence of a flooding trend

The evidence that flood elevations are increasing and at a rapid rate, Pahl asserts, is undeniable.

“That FEMA has elected to reduce flood elevation requirements in some cases comes as a bit of a shock to us, especially in light of Dorian,” he said, adding hadn’t seen flooding the likes of Dorian’s wrath since the 1944 hurricane.

“We certainly can’t deny that flood elevations are increasing,” Pahl said, noting that Hurricane Alex in 2004 set a new high water mark for the island since the 1944 storm.

Hurricane Matthew broke that record in 2016 by a foot and a half, and just three years later, Dorian significantly exceeded Matthew’s flooding.

“Technically, it’s only three data points but it would be foolish at this point not to recognize it as a trend,” he said.

Mundt acknowledged that the revised maps may be the subject of some confusion but added they are the result of 25 years or more of data that indicates that the surge, at the time of the study, was in fact less than what was predicted in the 1981 data that current maps are based on.

“Additionally, because we have better terrain data that they didn’t have in 1981, we’re able to model how the water that’s in the open ocean passes through the inlets and then goes into those receiving sounds.”

To the south of Cape Lookout, where those receiving sounds are smaller, water gets higher than the same amount of water that passes through larger sounds to the north, he explains.

The X or shaded X zones are considered moderate-to-low-risk areas and are often referred to as the 500-year flood zone, where insurance isn’t federally required through the National Flood Insurance Program but is recommended.

Regardless of where a property lies in the flood zone, however, Mundt’s advice remains steadfast: “Get flood insurance.”

The maps, he asserts, “are just a statistical probability of flooding. Mother Nature does not read our flood map, and we know that recent flooding events, whether you are talking about Matthew or Florence, rainfall events have exceeded what are the 1% annual chance; and when we have more rain than what we’re predicting, you’re going to see flooding outside of where we map.”

While Dare County experienced a large portion of homes being moved out of the SFHA, other counties like Onslow, saw the opposite.

Onslow County Land Use Administrator Angie Manning said her county is a seeing pretty good number of properties being labeled at an increased risk for flooding, moving from the AE to the VE zone, while some in the AE zone are seeing a lower BFE standard.

There were some areas of the county, like Topsail Beach, where a number of properties were moved out of the SFHA.

“But as we learned in Florence,” Manning cautioned, “floodwaters don’t know where lines on the map are, nor the base flood elevation. Structures flooded that weren’t in the (flood) zone.

She added, “Really everyone should get flood insurance … it’s just a smart thing to do.”

Craven County Planning Director Don Baumgardner said that while there are not tremendous changes in his community’s new flood map, some areas have been taken out of the flood zones that have had substantial flooding up and above the previously shown flood elevation.

“Yes, we are concerned about areas taken out – not just because we think might flood, but we’ve actually seen them flood,” Baumgardner said.

But Baumgardner acknowledged that there’s a larger issue at stake.

Recalling flooding from Hurricane Florence, the worst that many areas the state has seen since the 1950s, Baumgardner said a shift is needed to begin the process of not building in harm’s way.

“This is a bigger issue than one community and its maps,” he said. “If you’ve ever been flooded, you are either selling, moving to higher ground or elevating your house … we all know that history does repeat itself and can be exceeded.”