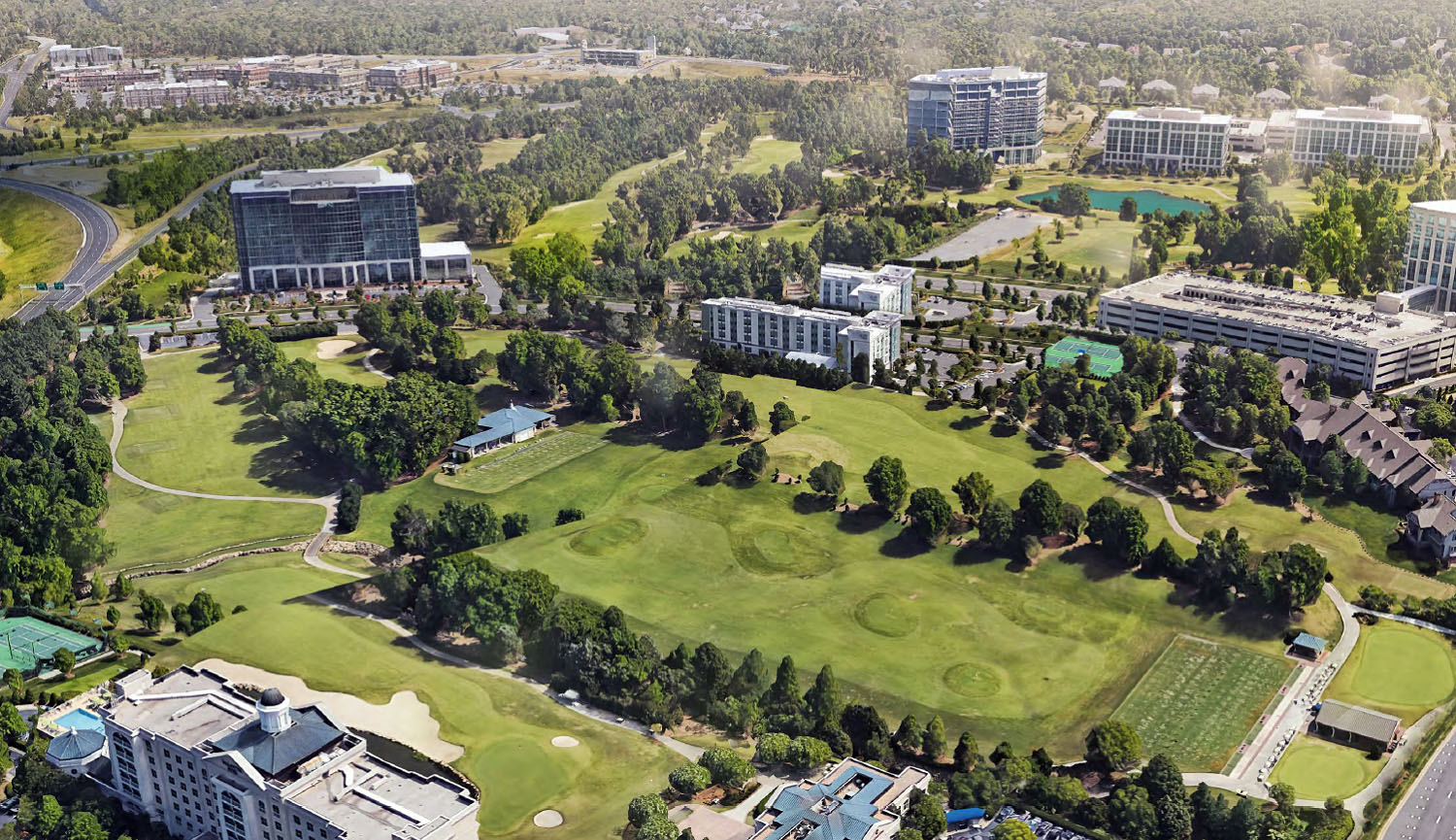 With the economics of golf courses changing, the fate of courses like Charlotte’s Golf Club at Ballantyne, now owned by developer Northwood, remain clouded, also creating uncertainty for the local governments that tax them. Photo courtesy of Northwood.

The arches and terraces of the Ballantyne Hotel in south Charlotte have framed a view of the smoothly sloping adjacent golf course since the place opened 18 years ago.

Visitors had better take a good look while they can. The lawn will soon be replaced by a winding creek, walking paths, trees and midrise residential and office buildings.

Golf is not as popular as it once was.

Twenty years ago – when The Golf Club at Ballantyne was brand new – the industry was in a building boom, according to the National Golf Foundation. Then growth hit a sand trap. Since 2006, the number of courses has shrunk by 8 percent nationally.

Defunct golf courses potentially offer a rich and complex opportunity for North Carolina local governments to expand the tax base, some municipal planners and researchers say.

Exactly how much more revenue communities can capture from obsolete courses depends on developers’ plans, neighbors’ demands that courses reincarnate as public parks, the location of the courses and how much the courses already were contributing to tax rolls, if they were at all.

North Carolina’s 675,000 active golfers have 496 courses to choose from, 42 fewer than they had a decade ago, according to an analysis by Kelly Cederberg, a professional landscape architect who studies golf course redevelopment as part of her role as an adjunct faculty at the University of Arizona in Tucson.

Municipalities across the country are just now catching up with the potential and perils of shuttered courses, Cederberg said.

“If they aren’t legally tied to a homeowners association, there usually are no limits on development,” she said. “Nobody can fight it, and the golf course is turned into another subdivision.”

The sheer size of an 18-hole golf course represents a significant opportunity to gain – or forfeit – tax revenue. Whether additional tax revenue can be extracted depends on the size, condition and location of the course as well as its ongoing tax status, say assessors and municipal tax authorities.

Like all municipal parks and recreational facilities, golf courses operated by counties and cities usually don’t pay property taxes because they are publicly owned.

If and how much a privately owned golf club and course might pay in taxes depends on local land use and taxation laws.

For instance, the 18-hole golf course at Rockfish Country Club in Duplin County, north of Wilmington, is already assessed at a commercial rate, explained Gary Rose, the county tax administrator. The now-defunct club was a nonprofit, but the course “did not meet the criteria for religious, educational or a similar purpose,” which would have excused it from property taxes, he said.

Rockfish closed in 2018 and was purchased recently by a private party, which has not disclosed its plans for developing, farming or trying to snag an even lower tax rate by promising to keep the land undeveloped, Rose said.

Having it both ways

Officials in New Hanover County and the city of Wilmington have navigated a thicket of public opinion about how to make the best of use of the shuttered Echo Farms Golf and Country Club.

In the end, they figured out how to have both their green space and bring in more green, too.

The city and county together paid $1.7 million for 14 acres of the former facility and will share the cost of replacing the old clubhouse and pool, repairing tennis courts, and adding a playground and walking trails, said Malissa Talbert, who handles communication for the city of Wilmington.

A faction of homeowners whose houses overlooked the golf course sued the property owner, Matrix Development Group, to try to prevent the company from building a new crop of houses on the site. The suit was settled in mediation in September 2017.

“We’re fortunate that the developer and the public could get something out of the situation,” Talbert said. “We got both green space and places for people to live. It wouldn’t have happened if we didn’t have an active, determined group of citizens pushing this.”

“As North Carolina communities sort through the possibilities presented by closed golf courses, residents will have to accept that the land most valuable for redevelopment and for adding to the tax rolls is also the most precious for green space in already dense neighborhoods,” said Christopher Chung, chief executive officer of the Economic Development Partnership of North Carolina, which is the state’s designated marketing and economic development arm.

“A course in a slow-growth market will have a very different value than one in Raleigh or Charlotte, where land is in high demand,” Chung said. The Town of Rutherfordton is considering its options on the Town golf course.

“Potential value – and corresponding community opinion – scale with “market context and the physical context of the course itself,” he said.

The very fact that a course has outlived its popularity is a good indicator that market forces, and local residents, want something else from that parcel, he added.

If a course needs to be redeveloped because it’s no longer financially viable or because there’s a need to accommodate more housing or commercial development, it will (be redeveloped), regardless of whether or not there’s a template” for how municipalities should proceed in such cases,” Chung said.

Meanwhile, the last golfers are teeing up at the Ballantyne course.

As the project plans are just now crystallizing, both the Charlotte city planning department and the owner and developer, Northwood, declined to estimate potential tax revenue.

Northwood submitted its zoning requests to the city on July 19. Now, the city gets to sort through exactly how much it will likely gain.